Home » News » APSU celebrates 90 years of residence life – the heart of the college experience
In this section
Housing, Residence Life and Dining Services CLARKSVILLE, Tenn. – In the fall of 1931, Austin Peay Normal School students eagerly watched construction crews put the finishing touches on an impressive new dormitory. The Myra McKay Harned Hall, with its “columns and polish marble floors,” would soon become the centerpiece of a young campus crowded with old, deteriorating academic buildings, left over from the defunct schools – Stewart College and Montgomery County Masonic College – that once occupied the Austin Peay grounds.

Another year would pass before the finished building officially opened – furnishing it apparently took several frustrating months – but once students walked through its doors, Harned Hall exceeded their expectations.

“The long, stately building which crowns a bowl at the northeastern end of campus, is seen these days from the street, through bare boughs and presents indeed an architectural vista of distinction,” the All State, the school’s student newspaper, reported in 1932.

In the years that followed, the building would serve as a women’s dormitory, house Navy cadets during World War II, outlast a local effort to have it demolished and narrowly survive a powerful E3 tornado. Today, Harned Hall is the oldest building on the APSU campus, but as the first official structure built specifically for Austin Peay, it also represents the school’s 90-year commitment to the benefits of living on campus.

This 90th anniversary is an important milestone in the University’s history, because residence halls form the lifeblood of this campus, often providing the most lasting and meaningful experiences of a student’s academic career.

“For years Harned was the only place on campus (where) students could entertain,” the late Mabel Meacham, former APSU Dean of Women, said in 1987. “All the (Homecoming) queens were crowned there. The stately columns and polish marble floors are a far cry from the 50-yard line.”

That same year, Student Government Association Secretary Sandy Rose reminisced about the memories that were made in the former women’s dormitory.

“My father proposed to my mother in that building,” Rose told The All State.

Today, those memories are being made in Austin Peay’s 11 new or newly renovated residence halls, from Castle Heights with its impressive views of Downtown Clarksville to the three Georgian-style buildings that surround the grassy residential quad along Drane Street.

“When a family comes up here and sees our housing, that often makes the difference for them,” Joe Mills, director of housing and assistant vice president for student affairs, said. “I will put our entire stock of housing against any other school.”

In the last 20 years, the University has invested aggressively in housing, with about 2,000 beds available on campus, because of the way residence halls promote student success. Studies conducted by Indiana University-Purdue and Kent State concluded that students living on campus have higher Grade Point Averages, and a University of Central Florida study found that on-campus students are more likely to stay in school and graduate.

“A lot of the campus experience is to get students to be exposed to people different then themselves, learn things like managing your time, get along with different people,” Mills said. “We really preach that living on campus is getting that education outside the classroom. And they’re making lifelong friends. Students don’t realize it when they’re in it, but years after they graduate, they still have friends they talk to that they met in Killebrew Hall, in Rawlings Hall.”

This is Your College

During World War II, Harned Hall housed around 184 women students, but in the winter of 1943, when the U.S. War Department sent 80 naval cadets to train at Austin Peay, several young men ended up living in that building. A double wall, insulated with rock wool, was erected to separate Harned into two sides – one side for women students and one side for the male cadets – and according to a Feb. 12, 1943 issue of The All State student newspaper, plans made for a 24-hour watch.

“All room doors will be kept open day and night, and a patrol will be constantly on the move in the corridors of all floors,” The All State reported.

Vigilant faculty members patrolled the halls, slept inside dorm rooms and marched with the young Naval cadets to the dining hall for breakfast and lunch. In an All State article titled “Meandering Meditations of a Mad Maid or Cool Contemplations of a College Co-Ed,” an anonymous writer lamented, “That miserable old Dr. Gilmore and the Navy rules. Why that war has to mess things up by enforcing strict ‘lights out’ rulings on those charming Cadets. Oh, but if it wasn’t for the war I wouldn’t have all this practice exerting my charms.”

A few years after the war, in 1951, Austin Peay opened a new dormitory, Ellington Hall. Today, that building houses the University’s Admissions and Financial Aid Offices, but in the 1950s, according to the promotional documentary “This Is Your College,” the residence hall provided state-of-the art amenities to the school’s male students.

Students unpack their rooms in 1991.

“New and modern in every respect, the dormitory offers the comforts of home for the surprising cost of $8 a month,” the documentary said. “That’s only about 27 cents a day. Each room has ample closet space for two, and in addition to that, it has the added convenience of running water.”

Across campus at Harned Hall, the female students lived with a “house mother,” who kept a close eye on her residents. Dr. Carlette Hardin, retired professor and former dean of the APSU Eriksson College of Education, experienced this first hand in 1968 when she lived, as a student, in the building’s top corner room.

“I think the thing I most remember was how restricted everything was and how fast it changed,” she said. “We had to check in and out and had curfews. We mostly wore dresses to class during my freshman year. By the time I graduated, I was wearing hot pants. No phones in the room. There was a phone in the hall and calls were never private as girls walked by and wanted to know if you were talking to a boy.”

Throughout the 1960s, as booming enrollment helped Austin Peay transition from a state college to a state university, the school added several new residence halls with names like Killebrew, Cross and Rawlings. By 1991, when Mills first arrived, those aging buildings were failing to attract potential students.

“From the standpoint of how housing has changed, I think it’s a higher expectation of service and amenities,” Mills said. “Back in 1991, we had no internet, no cable TV. We’ve got to keep up with the off-campus market.” At the beginning of the 21st century, Mills helped lead the University into a new, modern era for housing. Hand Village – an apartment-style residential complex – began welcoming students in 2004, and then on Aug. 11, 2011, the $25.5 million, 416-bed Castle Heights opened its doors on a hillside overlooking campus. A few months later, three deteriorating residence halls built in the 1960s – Cross, Killebrew and Rawlings – were torn down to make way for Austin Peay’s first residential quad.

“It really is going to transform the campus, especially the Drane Street area,” Mills said back in 2012.

When the $34 million complex – Eriksson Hall, Governors Terrace North and Governors Terrace South – opened in 2013, the new buildings and green space helped reinvigorate the University. Students viewed the new complex with the same reverence as their forebearers did of Harned Hall back in 1931.

Shortly after the complex opened, students gathered with friends on the quad’s wide lawn, relaxed there after class with a bookbag for a pillow and bent over books in the grass, studying for the next day’s class. The new residence halls also became one of the main stops for potential students during campus tours. These future Govs were eager to see the complex with a cafeteria, kitchens and lounges on each floor, and free Wi-Fi.

“Time moves on and so [do] the amenities that our students require in order to live on campus,” Sherryl Byrd, former vice president for student affairs, said during the building’s September 2013 grand opening. “They are significantly different these days than they once were.”

‘Following in my steps’

Several decades earlier, in the mid-1960s, the University opened Sevier Hall – a red brick building right in the heart of campus. That’s where Janine Wine lived in 1990, during her first year at Austin Peay. Twenty-eight years later, on a hot afternoon in August 2018, she found herself standing in the same room she once called home.

“I was a freshman here at Austin Peay, and this was the dorm that I had,” she said that day. Janine and Janesa Wine in 2018 at Sevier Hall.

But Janine wasn’t there to reminisce. Her daughter Janesa, a freshman, was moving into the same room where her mother once lived nearly three decades earlier.

“I said to my roommate, ‘my mom was in this dorm room, and it would be really cool to be in this room,’” Janesa said. “It means a lot to me because me and my mom are really close.”

After contacting the APSU Office of Housing, Residence Life and Dining, Janesa was able to reserve her mother’s old room. On that August afternoon, the pair unpacked the younger Wine’s belongings while Janine reminisced about her time at APSU.

“It was really neat that she chose to come here and wanted to be in my room,” Janine said. “Not only is she my namesake, she’s following in my steps where I went to school and living in the same dorm. And it makes me comfortable because at least I know where she’s going to be.”

As if to prove the research championing the benefits of on-campus living, Janesa recently graduated from Austin Peay, ending a successful college career. After spending her freshman year in Sevier Hall, she went on to serve in the SGA, as a peer leader, a volunteer for the campus’ SOS Food Pantry, a member of Omicron Delta Kappa and other meaningful campus, state and national organizations.

“Living on campus, you regulate your time – we’re not doing wakeup calls,” Mills said. “You’re running your own ship. That’s part of the education you can get here at Austin Peay.”

For information on housing at APSU, visit www.apsu.edu/housing. 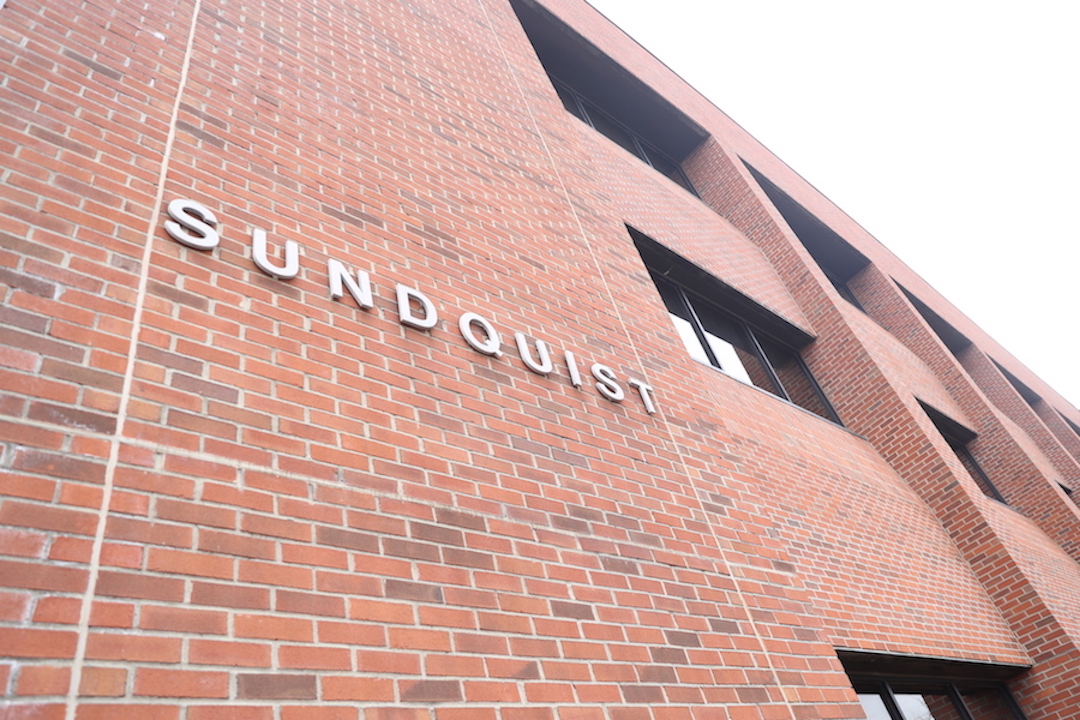 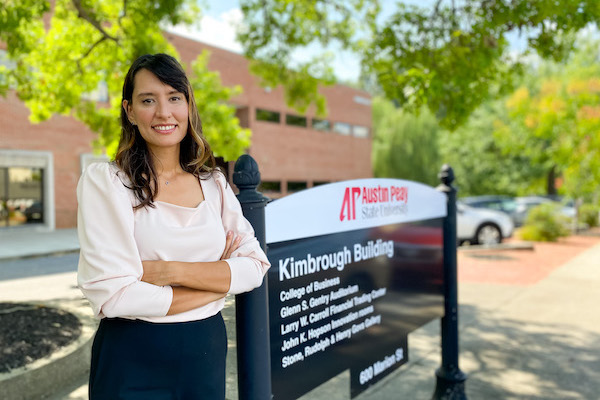